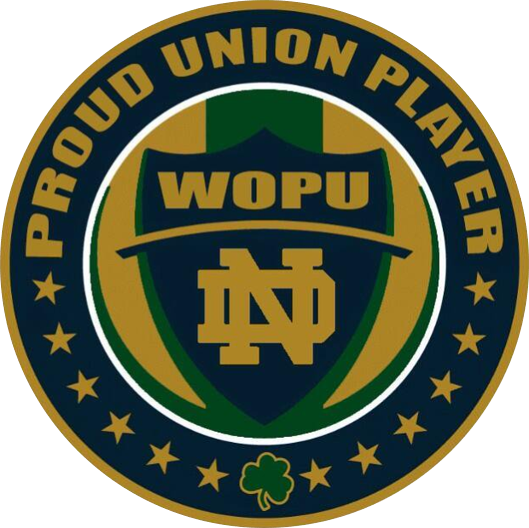 Read the article on UHND.com!

College Football is defined by the sixty minutes on the gridiron each Saturday, but that is not where games are won or lost. The unsung heroes of Notre Dame Football are behind the scenes putting in the work at each practice. A group that is seldom in the spotlight, the walk-ons at the University of Notre Dame, have formed a legacy and group known as the Walk-On Players Union.

Note: this is the first in a series of articles we will be writing about Notre Dame’s WOPU Nation and the unique bonds its forms for its members both on and off the field that carries on long after their time at Notre Dame comes to an end.

Humble beginnings in South Bend. Deciding to walk-on at Notre Dame or anywhere is a significant decision for these student-athletes. Some players pass up scholarships at local schools in hopes of playing for one of the most historic programs in college football. For the players and their families, it is a sizable financial commitment to attend the University without a scholarship.

Many fans throughout the country are familiar with the story of perhaps the most famous walk-on of all-time Rudy Ruettiger. The movie portrays how Rudy was able to make it through tryouts and ultimately achieve his dream of running out of the tunnel. Today, most walk-ons are “preferred” and have been in communication with the coaches on their role within the program.

However, there are still “Rudy-like” stories coming out of South Bend. Current walk-on Xavier Lezynski attended student tryouts and was cut on his first attempt. Thanks to his determination and perseverance, he was able to make the team on his second attempt.

A student-led initiative is formed. WOPU Nation was certainly not around when Rudy attended Notre Dame, and the term is new for the program. According to current walk-on John Mahoney, the title of WOPU Nation has been around for nearly two decades. Members of this organization have built bonds that have lasted well after their playing careers, and alumni of WOPU Nation can now be seen tailgating for games in the fall.

Who are the leaders of this group? The leaders of WOPU Nation are typically the seniors who have been handed down their responsibilities from the players who came before them. Formally, the Irish walk-on’s select a President and Vice-President to supervise this group.

This year, the President of WOPU Nation is senior John Mahoney from West Des Moines, Iowa. He is accompanied by Vice-President Patrick Pelini from Youngstown, Ohio.

Senior Walk-Ons take on leadership roles. WOPU Nation has a group text with the entire roster of walk-ons, which typically comprises thirty to forty student-athletes. These messages include golf outings, football meetings, and overall team-building exercises. WOPU Nation has built a relationship that is unparalleled across college football.

This group goes beyond the playing field and outside the coaching staff. It is great to see individual players step up to take these roles year after year.

Retention defines WOPU Nation. Player turnover is one of the most significant setbacks across college football and sports in general. Retaining walk-ons is what separates Notre Dame from other institutions. John Mahoney has attributed the cohesiveness, relationships, and leadership to players putting in the effort for all four seasons.

How much does this mean to the players? Chris Finke made it clear when he scored touchdowns, often throwing up the “W” with his hands for WOPU Nation.

Walk-Ons at Notre Dame vs. Other Programs

All athletes are equal in South Bend. The University of Notre Dame always operates the “right way,” and that is no different from how the football program treats its walk-on players. All students at the University room together, no matter what sport they do or do not play. There are no separate areas for the walk-ons, scholarship athletes, or the general students. A feature that helps to establish an identity for individuals beyond the playing field.

At some schools, athletes are placed together and get special privileges not awarded to non-student athletes. But, at the University of Notre Dame, football players build connections with students with all kinds of backgrounds.

Building relationships on campus. The cohesiveness of Notre Dame not only on the playing field but in the classroom is second to none. Whereas some schools allow players to take mainly online classes, the University has almost every class in person. Although COVID-19 has forced students into remote learning, hopefully temporarily, the school has always valued in-person education.

Conversely, when Heisman winner Joe Burrow was asked about his relationship with his classmates at LSU, he said, “Obviously, I don’t go to class because I only take online classes, so I don’t get to see any of those people.”

I may be old school, but to me, that defeats the entire purpose of college.

Earning a Scholarship. When a Notre Dame walk-on earns a scholarship, no one could be prouder than the fellow members of WOPU Nation. Although they may get kicked out of the walk-on group messages for 20 minutes, they are always allowed back in once the joke is over.

In recent memory, Chris Finke was awarded a scholarship and, ultimately, a captain role for the Fighting Irish. Finke was a big advocate for walk-ons while at Notre Dame, and his story is an inspiration to players who may have been overlooked out of high school.

Becoming a “Notre Dame Man” after graduation. Notre Dame goes beyond the playing field, attending the school is a four-year decision that will pay off the next forty years and beyond. Sports fans often forget that these are young men who have their entire lives ahead of them.

Walk-Ons are not in it for the glory. Fans only get to see the product on Saturdays when a touchdown is scored, but there is a lot more that goes on behind the scenes. Including walk-ons, the Irish roster is composed of over 100 players, few of which see significant playing time on Saturdays.

So why do they do it? Their passion and commitment to better themselves and their teammates for the next opponent.

Graduating Champions. Yes, some players can work their way into playing time, and some even become captains. However, one’s success is not determined merely by statistics. The work that these young men put in every day in practice makes them winners.

Notre Dame is about more than football. It is about the leaders that these walk-ons become in their communities long after they take off their jerseys.